Community comes together to fight cancer

Last Friday evening Marlboro teacher Kathy Keane ran a cancer fundraiser, named ‘Pinktacular’, at Mary Jane’s Dairy Bar in Middlehope This is the 7th year the event has been held at …

Community comes together to fight cancer

For the past two years Marlboro senior Katerina Calderone has been hanging teal and purple ribbons around town to bring awareness to ovarian and gynecological cancers. She is pictured with her ribbons, standing in front of the Sarah Hull Hallock Library in Milton.
A ‘Pinktacular’ fundraiser was run by Marlboro teachers Kathy Keane (l.) and Monica Taddeo.
Posted Wednesday, October 13, 2021 12:34 am
By Mark Reynolds

Last Friday evening Marlboro teacher Kathy Keane ran a cancer fundraiser, named ‘Pinktacular’, at Mary Jane’s Dairy Bar in Middlehope This is the 7th year the event has been held at Mary Jane’s.

“We kind of use October since it is breast cancer awareness month to do our kickoff, but it encompasses every single type of cancer,” Keane said. “The students and the families that reach out to me are people that have had prostate cancer, have had leukemia or have had breast cancer.”

Keane said this initially started at the Woodbury Commons Outlet stores with teachers holding their annual 5K walk. Soon students began asking Keane if they can have a club at school that can help those locally who have been impacted by the disease.

“This is what initiated it; it was the kids,” she said.

Though there is no specific club per se, Keane said the students pushed for a fundraiser.

“So what we do is through our honor society club; that’s the one club that we go through that they’ll help donate, will do things with us and help us bake goods...So we started events that kids can come to and be a part of it,” she said.

“She has been phenomenal,” Keane said. “She donates all the proceeds [$5] from her pink delicious sundaes to the fundraiser.”

Keane said they have raised from $1,000 to $1,500 from this one event. It gets coupled with money they raise from the read-a-thon and from selling T-shirts.

“We talk to our [school] social workers, our nurses and to students who come in and families that call me and we divide the amount,” she said. “Last year each family got $1,000.”

Keane said the families receive the money just before Christmas and can chose to use it for travel to the hospital, for food, a hotel, gifts for their children or wherever it is needed.

“They need to use it for something that is going to help alleviate the stress on them. We don’t go back and check and tell me what you did,” she said.

Keane said they have found the number of cancer cases rising every year, “and the more we do this [fundraisers] the more people feel comfortable coming out and asking for help that we didn’t know about...This month is kindness month and giving back to others in the schools, so we tie it into that.”

Maryanne Phelan’s son survived Hodgkin’s Lymphoma, a cancer of the lymphatic system, which is part of the immune system. He is now 24 years old, a graduate of Syracuse University with a degree in Engineering and presently works for Lockheed Martin. Maryanne said Keane and the school were very supportive to them during an exceedingly difficult time in their lives. She often returns to support the fundraiser.

Monica Taddeo, who teaches 3rd grade at the Elementary School, said she helps run this event, “because it’s always a passion of mine to give to others when possible.” She pointed out that the money they raise is used to help those in the community.

“We have so many here going through this horrible disease that we can easily help. It’s not obviously going to pay all medical bills but it might just get them something special,” she said.

Marlboro senior Katerina Calderone has recently been bringing attention to ovarian and gynecological cancers because her grandmothers are survivors of these diseases; Janet Felicello for 18 years and Connie Calderone for 8 years. Calderone said raising awareness is important to her because these types of cancers that her grandmothers have had often do not get as much attention as breast cancer.

Last year Katerina began hanging teal and dark purple ribbons on businesses around Marlboro and Milton and she has continued doing this in 2021. She said some of the businesses have offered to make donations to charities associated with these types of cancers. People have also approached her, asking about the meanings and colors of the ribbons.

“I tell them I’m doing it to raise awareness,” she said. “The warning signs are not as noticeable as other types of cancers and there is no preventative kind of test that you can do. That’s why its important to raise awareness because some women don’t find out until it’s too late.” She said tests such as a trans-vaginal ultrasound or a blood test for the serum marker CA-125 are proving helpful in screening for certain types of ovarian cancers.

More information can be found at the Memorial Sloan Kettering Cancer Center at mskcc.org. 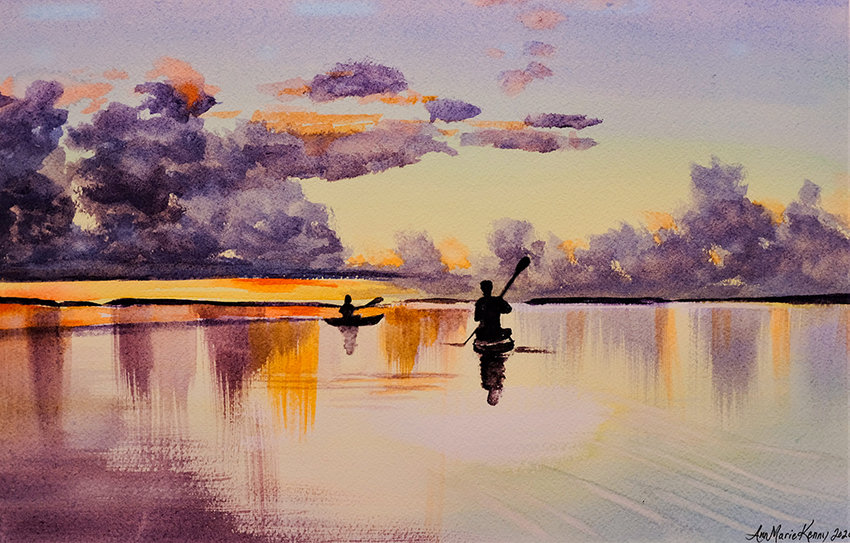