Last week representatives of the proposed Village In The Hudson Valley failed to show up at the Lloyd Zoning Board of Appeals meeting, even though they were on the agenda. Chairman J.O. Litts said he …

Last week representatives of the proposed Village In The Hudson Valley failed to show up at the Lloyd Zoning Board of Appeals meeting, even though they were on the agenda. Chairman J.O. Litts said he did not know why the project’s representative failed to attend the meeting.

Project owner Mark Sanderson is proposing to build a large-scale, mixed-use commercial and residential Continuing Care Retirement Community [CCRC] on the western side of Route 9W, opposite the Bridgeview Shopping Plaza. It consists of 212 single and multi-family independent living homes for seniors 62 and older; a 145,000 sq/ft Assisted Living facility and an 11,000 sq/ft Urgent Care Center that will be open to the public 24/7.

In a January 3, 2020 letter Building Department Director Dave Barton issued a ‘Determination of Non-Compliance’ on the project, stating that it does not meet the town’s definition of a CCRC according to Sec. 100-8 of the town code, “and is therefore not a permissible use in the Residential ½ acre district.” He pointed out that the proposed project, “has not met the definition’s requirement that the proposed use has received or will be able to receive a Certificate of Authority, pursuant to Article 46 of the New York State Public Health Law.”

Barton wrote that, “Conformance with the town’s CCRC definition, a use variance or a legislative change to the definition is required before the project can be referred to the Planning Board for a public hearing and determination under the Town Code, sec. 100-53(F)(1).”

Barton said that until this issue concerning the certificate of authority, in accordance with Article 46, is resolved, “a zoning compliance verification cannot be provided to the Planning Board, nor can the Planning Board conditionally approve the application.”

Barton also asked the Village project to supply a, “sufficient narrative detail concerning how the proposal provides for the independent living, the enriched housing or adult home, and the nursing care units, that meet the separate definitions of those terms provided in the Zoning Code.” In addition, Barton wants the developer to furnish applicable references on how these units meet the compliance determination in accordance with the requirements of the CCRC definition.

In response, project attorney John W. Furst, of Catania, Mahon & Rider, submitted a letter, dated January 31, 2020, to the Lloyd Zoning Board of Appeals. He states that the Determination “incorrectly” concludes that the proposed project does not meet the town code concerning CCRC proposals and improperly concludes that this is because the project has not received or will not be able to receive a Certificate of Authority under Article 46 of the NYS Public Health Law. Furst points out that although his client’s project has been before the Planning Board for 8 months, Barton, “now finds that the Planning Board has no jurisdiction to review the application.”

Furst contends that the project meets the town code because they will provide independent living, enriched housing/adult homes and nursing care units and are allowed by a Special Use Permit that may be granted by the Planning Board.

Furst stated that their original application to the Planning Board was made in March 2019, which was followed by five appearances by the project team before that board, culminating in a public informational meeting at the firehouse in August 2019. He said as a result of these meetings the project has been “significantly revised to address any concerns,” the last of which was submitted to the town on January 7, 2020.

Furst noted that Sanderson has been paying for a host of his own consultants and has also paid $15,000 into a town escrow account to cover Planning Board consultants. He added that on top of these fees, Sanderson paid $69,000 for a Planning Board application that was submitted in April 2019. He estimates that in all, Sanderson has spent approximately $500,000 on his proposed project.

Furst stated that he only learned about his client’s failure to meet the code from Barton and the Planning Board’s attorney after a technical meeting in December 2019.

“It is unclear why the Director determined this was a potential problem now, but Mr. Sanderson is very anxious to move forward despite the constant obstacles thrown at him by the town,” Furst wrote. “The Director’s interpretation is irrational, unreasonable and inconsistent with applicable laws and should not be followed by the ZBA.” Furst stressed that Sanderson has consistently stated that he will move forward in seeking the Article 46, “thus I am not sure what spurred the Director’s Determination.”

Furst contends that Barton is wrong about obtaining the Article 46 certification before further review moves forward because the NYS Department of Health will not even “entertain” an application unless there are local municipal approvals “in hand.”

Furst touched upon another point; stating that the town code in section 100-45 C “never specifies when the applicant...shall comply with the applicable provisions and procedures dictated by Article 46.” He claims that the town code’s use of the word, “procedures” implies that the project can later apply and receive the Article 46 designation. Furst goes further, stating that the town’s definition of a CCRC could, “easily be interpreted to contemplate State approval after the fact.” The code, however, does not back Furst’s claims, but simply states that an applicant, “for CCRC development shall comply with the applicable provisions and procedures dictated by Article 46 of New York State Public Health Law.” Furst asserts that Barton, “took it upon himself” to determine that an applicant for a CCRC project must obtain the Article 46 designation, “prior to any review or conditional determination by the Planning Board.”

In mid January the Town Board approved a 6 month building moratorium (with two, 3 month possible extensions) aimed at large scale development projects, one of which is the Village In The Hudson Valley. The board’s stated goal is to take the needed time to review and amend their Comprehensive Plan as well as the Town Code. The Village project has requested the town to grant them a waiver to continue the review and is the only one seeking exemption from any new changes made to the Comprehensive Plan or the town’s Zoning Code. This latter matter, on waivers for this project and others, will be taken up at a public hearing that is scheduled for Wednesday, February 19 at 7 p.m. at the Town Hall, 12 Church St, Highland. 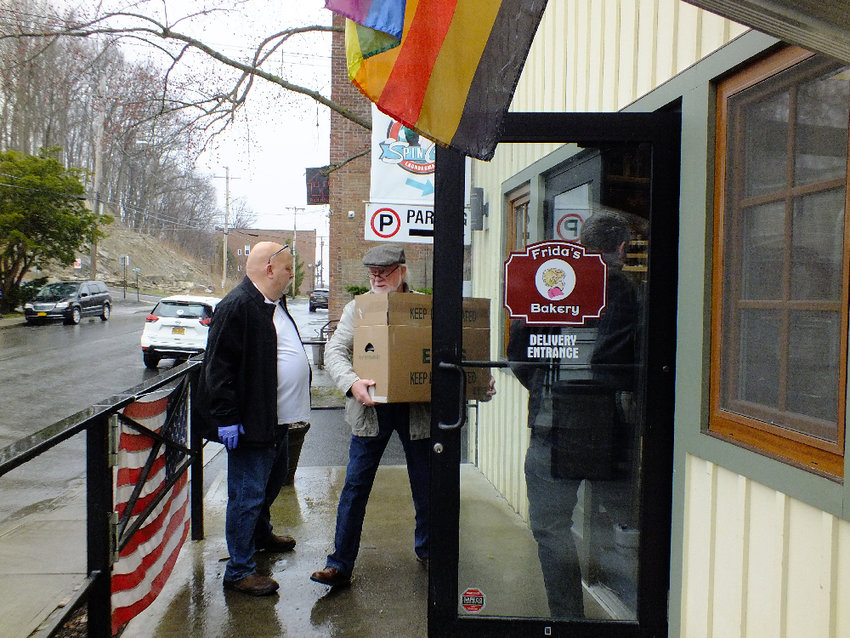 Frida’s Bakery and Cafe in Milton is doing what it can to help the people in their community weather the Coronavirus storm that has swiftly spread across the entire nation. Lately a group of …

Ulster County Executive Pat Ryan Sunday confirmed the first death related to COVID-19 in Ulster County. For reasons of privacy, specific information cannot be provided. Ryan did confirm that the … 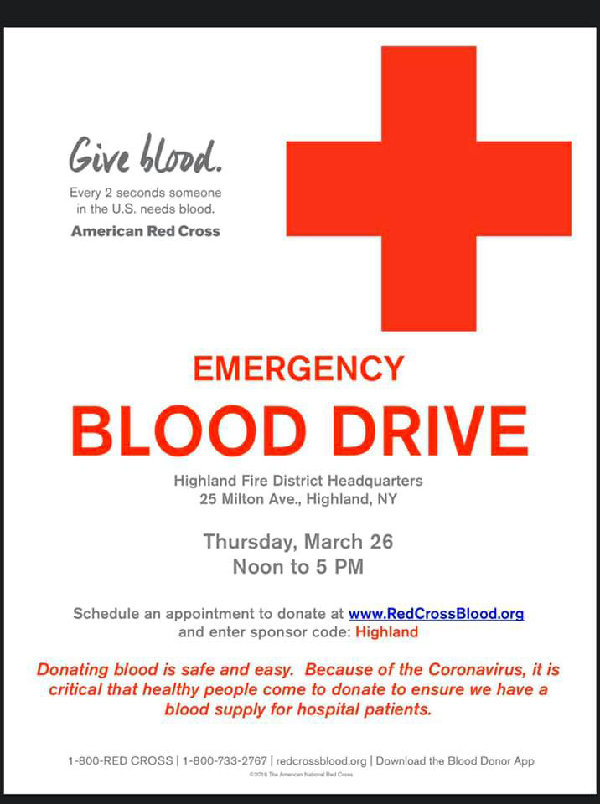 Community comes through at blood drive

The Highland Fire House partnered with The American Red Cross to host a blood drive on Thursday, March 26, from 12-5 p.m. There are nearly 300,000 fewer blood donations due to the coronavirus and … 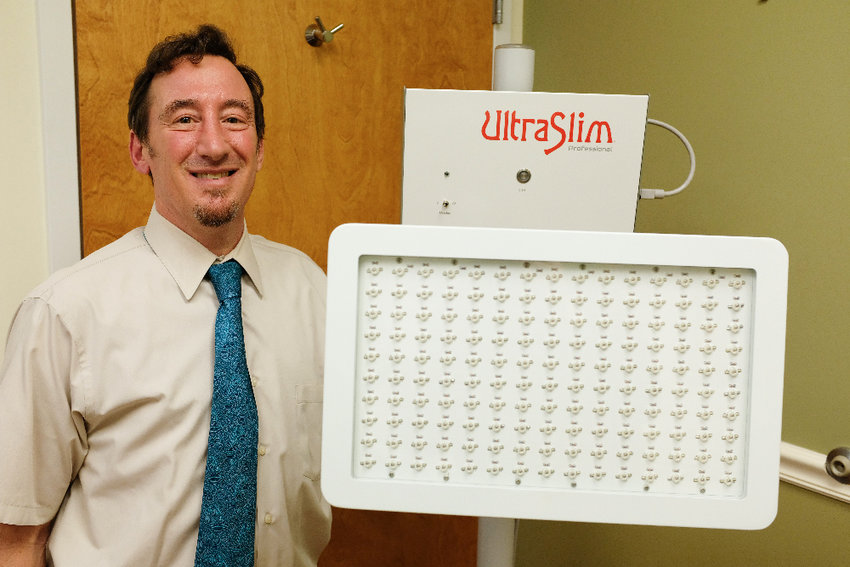 Dr. Stephen Weinman, of First Care Medical Center in Highland, said they are still seeing patients in the family practice, in the Urgent Care and for Physical Therapy. “The patient volume … 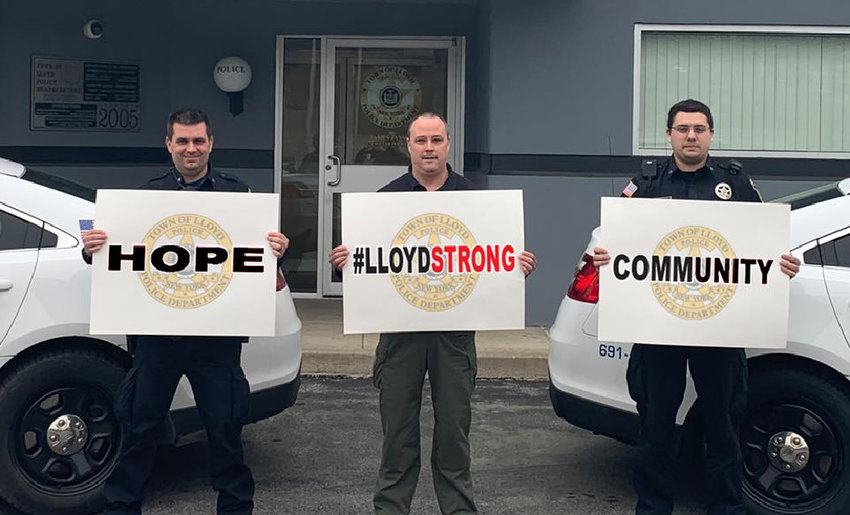 At a recent Lloyd Town Board meeting, Building Department Director Dave Barton reminded the public of the importance of installing smoke detectors in their homes. Barton said his department …

Pino Pascali: Between Arte Povera and the Mediterranean 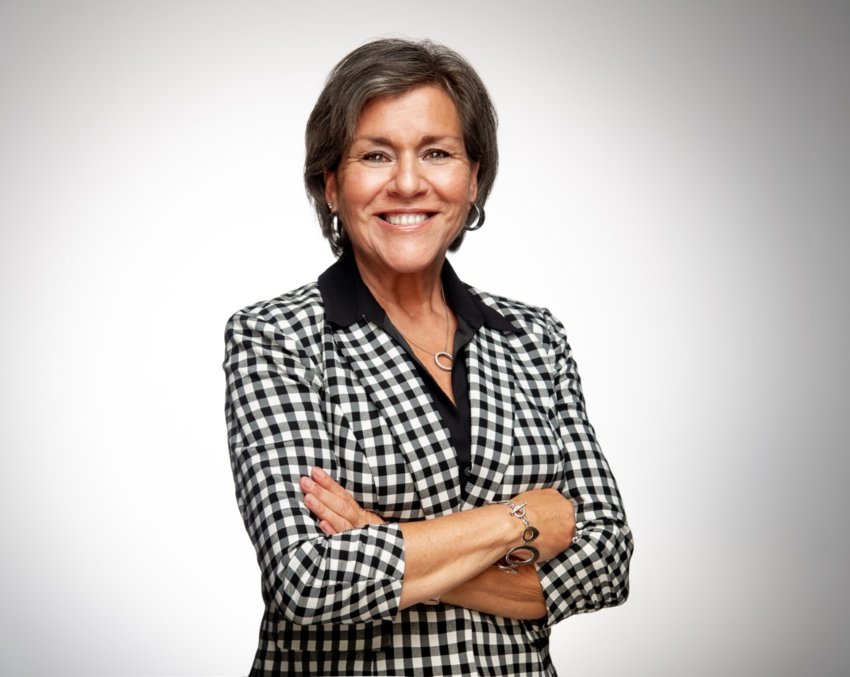 For 26 years, the Orange County Citizens Foundation Board of Directors selects a citizen worthy of receiving the Ottaway Medal. Named in honor of Ruth and James Ottaway, prominent philanthropists and …

For years on 545 South Street laid a building that many have deemed an eyesore and sign of urban blight. Last week the building was officially demolished. According to William Horton, City of …